A new way to store data on a super smooth material has enabled scientists to come up with an atomic-scale storage device that can store data up to 500 times denser than even the best state of the art conventional hard drives.

No doubt, it’s good news for companies that provide cloud storage and individual who just keep running out of space to store their favorite forms of media.

But that’s all it is, good news.

Even though the science involved in the storage’s development is great as scientists at TU Delft have been able to make use of a technique that has allowed them to manipulate chlorine atom positions to be used as bits of data.

That incredible feat has enabled these scientists to fit 1KB of information inside an area that is about 100 nanometers wide.

Now granted that 1KB amount of data seems like a joke, but if you scale it up to an area that is as small as a square inch then that amounts to about 63 Terabytes of data.

Imagine a hard drive that is equal in size to a quarter (United States coin) and is able to hold 63 Terabytes of data. It’s safe to assume that you won’t be utilizing that amount of space within your lifetime or even your children’s lifetime.

This piece of technology is so amazing that it can store data 500 times denser than the best hard drives that are available in the market today.

The problem is of course with the design of the atomic-scale hard drive. Currently, scientists have only been able to store that amount of data in extremely cool, super-clean and in vacuum environments.

So you won’t be able to buy this kind of an atomic-scale hard drive from markets and plug it into your computer with a USB cable anytime soon.

The reason is because of the science that is involved in storing such massive amounts of data on such a small area.

Scientists used a scanning tunneling microscope to rearrange chlorine atoms around the surface of copper atoms.

That created ‘data blocks’ whose location were marked by specific QR code looking markers. The markers also indicated if the data blocks were in working condition. 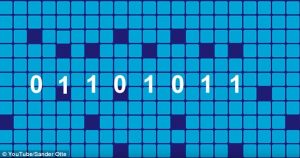 Traditionally, data is represented with a series of 0s and 1s.

As mentioned before, all this science means that these kind of atomic-scale hard drives will not be coming to stores near you this fall or any fall in the next ten to twenty years. The temperature that is required to keep the atomic-scale storage operational is about -321F (-196.111) which is exactly the boiling point of liquid Nitrogen, meaning, it is very cold.

Too cold to be used in homes or offices. The only place where that storage device can be used safely is in laboratories.

On top of that, in order to make the atomic-scale hard drive work you need to have a super clean environment.

The good news is that scientists do have a plan for a future where the device could be scaled up further to accommodate larger amounts of data even if the copper used in its development is flawed.

Researchers at TU Delfts also believe that it is only a matter of time before they crack the code which would allow the device to be usable under normal conditions.

In other words, in a future not that far away, you would be able to store an unbelievable amount of data in the tiniest of your devices like your wrist watch (or AppleWatch since we are talking about the future) or even in your glasses.

Devices which are slightly bigger, like your android phone or Apple smartphone, would be able to hold tens of terabytes on a single chip.

There is a realistic possibility that in the near future you would be able to buy mobile phones which would offer you virtually unlimited storage space.

The biggest beneficiaries from this technology would be no doubt cloud storage companies. As more and more people start to upload their files and other forms of data to online storage services, cloud storage service companies are finding it more difficult than ever to accommodate such gigantic amounts of data.

Scientists at TU Delft have made no comments about how fast these atomic-scale hard drives would be. Observers have already started to question the reliability of a device that uses such little space to store so many bytes of data.

We all have heard stories about how hard disks (non-atomic scale ones) have been totally destroyed by a single drop from a work desk. With such enormous amounts of data on a tiny piece of atomic-scale hard drive, the loss of data (and the financial loss as a result) in a case of an accident would be multiple times bigger as well. 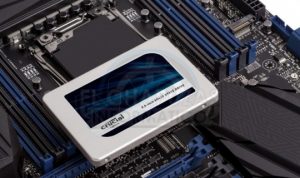 Others have pointed out that such titanic amounts of storage would be useless for the average consumers (though could prove to be game changers for data centers) i.e. the mass market as modern consumers would be more interested in the speed of the device (read/write speed) and security of the data that is on it rather than the sheer amount of space available.

And then there is problem of fitting a technology like “scanning tunneling microscope” into a smartphone to read and write data on the atomic-scale hard drive.

Doubters have also voiced concerns that such a device wouldn’t be feasible to produce at a large scale since the conditions it requires would mean that researchers would have to come up with a way to make a scanning electron microscope, a vacuum chamber and liquid nitrogen portable enough and aesthetically acceptable enough to be carried around by the general workforce that is increasingly becoming more mobile.

All these technological difficulties also raise questions about the durability of the device if and when it comes out.

This provides further proof that there is hope that someday we’ll be able to buy an entry-level iPhone (or any smartphone) which would be able to hold our entire collection of eBooks and TV programs.