The first time that the Stack LED Downlight Starter Kit made its debut was during CES 2015, but during that event only a prototype version was being displayed. It is a sensor-equipped, Nest-compatible smart bulb, and it was primarily known as the Alba LED. The company has then ditched the “Alba” in its name and renamed it with just the Stack Downlight. Furthermore, the initial price also went down and interested purchasers can buy additional bulbs that retail at less than half of the price of the kit. 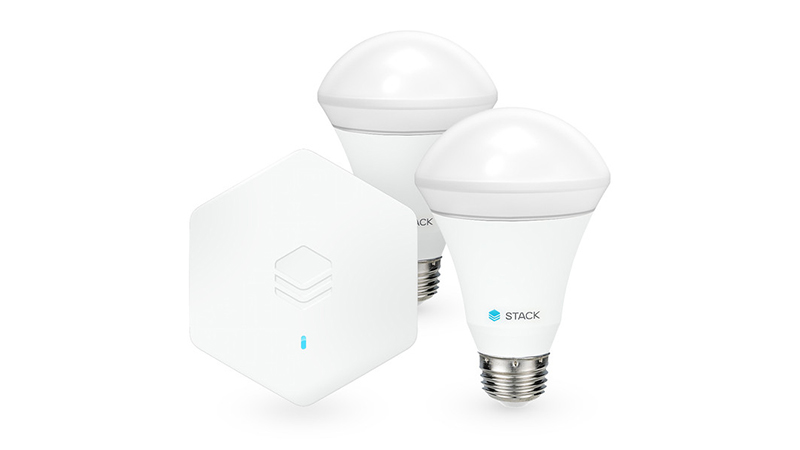 The overall package of the Stack LED Downlight Starter Kit makes it more affordable than the likes of the Philips Hue or Lifx. Furthermore, there are reports that state that Stack Downlight smart bulbs work in a smarter fashion as compared to its competitors. Even though it does not change colors, but they can change color temperatures. It is able to offer a yellow light of 2,700K to a more bluish-white tone of 6,500K, or practically anything in between.

When you place its smart bulbs into “Auto Mode,” they will automatically adjust their own brightness and tone throughout the day with the use of its built-in ambient light sensors. Another item in its list of features is the presence sensor found in each bulb. With such a sensor, should they see you walking into the room, the lights will turn on automatically in a fading style to light your way. This is great so that you don’t have to fiddle around the dark to find the light switch.

In truth, there’s really not much to dislike about the smart bulbs found in the Stack LED Downlight Kit. Its features work well just the way they are advertised, and the app controls perform an admirable job of ticking the right boxes. Its list of features are well-placed at the sweet spot between ease-of-use and comprehensive.

Furthermore, the smart bulbs in the Stack LED Downlight Starter Kit are able to work with your Nest thermostat (if you have such a device). It will smartly tell the smart thermostat to turn up the heat a little higher if the bulbs spot you staying in a room that tends to stay colder than the rest of the home. There’s also IFTTT integration involved, which will allow you to sync in a wide variety of other famous smart home services into it as well, which even includes the Amazon Alexa.