Miggo, the makers of innovative camera bags, mounts, and straps, brings another one of their crowdfunding projects to Kickstarter by way of Pictar – an ergonomic camera grip for Apple’s iPhone. Aside from being a camera grip, it also shifts some cumbersome menu functions into five programmable wheels and buttons that can easily be accessed at the tip of your shooting finger (just like what you can do with a lot of cameras). 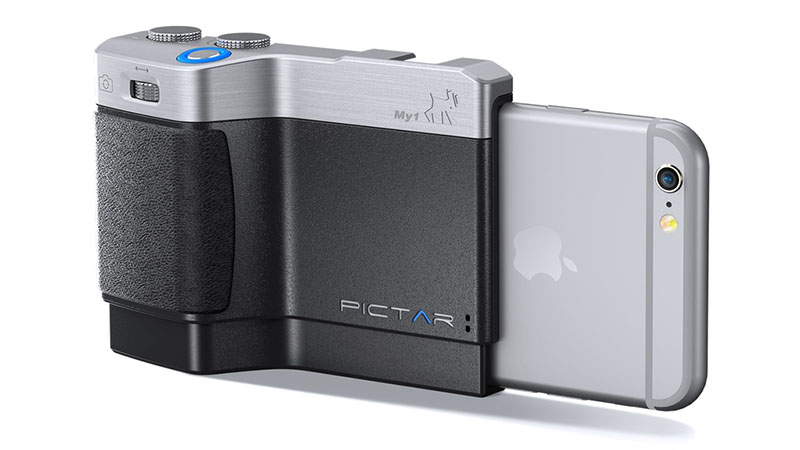 Rafy David, miggo co-founder, told the following to the Cult of Mac pertaining to the Pictar grip: “It’s an amazing camera (the iPhone) but it always feels like it’s going to fall out of your hands. What we’re trying to do is unleash the full power of the iPhone camera.”

Many love the touch and the sleekness of the iPhone as its design is definitely something to marvel at. However, holding it to take photos and video can be quite scary as one wrong move can let the phone come crashing down towards the ground. With the use of the miggo’s Pictar, it puts users at ease as they no longer have to worry about the most vulnerable position that would otherwise make you drop your pricey device.

This specialized grip offers a natural spot to where the fingers wrap. There’s also an optional wrist or neck strap that can be availed so you don’t have to keep on putting your iPhone inside your pocket when you’re out and about taking a lot of pictures. These optional strap also allows the user to keep the smartphone secure, out, and ready.

Many love the iPhone because of its superior camera and the fact that we no longer have to concern ourselves with wheels and buttons for controls. However, there are cases wherein hardware does make the overall shooting experience a whole lot better. For instance, those wheels and buttons make for faster shooting and control, aside from you fiddling with the numerous menu settings just to get to the item you want to tweak.

There is also a companion app that will communicate with the Pictar, and it uses high-frequency tones for each function users want to set to it. If you’re worried that the sounds emitted by the device will damage your hearing, then don’t be as those tones are so high you won’t detect the audio at all. With the use of such a technology, it allows users to keep the Bluetooth off and would therefore not be a hindrance towards battery life.