The 2015 model is now more than just good looks for the Moto 360. The first one had indeed made a big stir in the smartwatch scene as it was introduced alongside the Android Wear months ago. When it arrived, people were awed by how beautiful it looked. It even held the top spot after many months, even after it was released. Many people liked it simply because it looked like an actual watch, and not something that’s riddled with tech that defeats the purpose of what a watch should actually do – tell time. 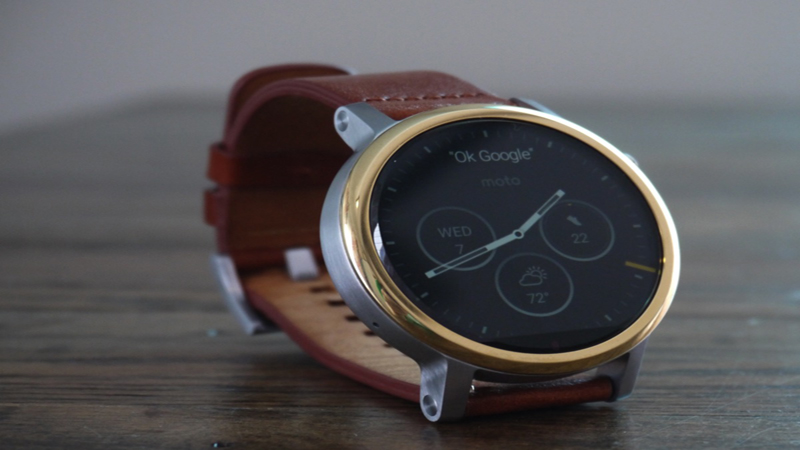 Before, the old Moto 360 had some battery life issues; in fact, it was plain terrible. But now, Motorola improved on this aspect and even brought a lot of neat upgrades into the mix. There are even new features which include software updates that helped fix what was the poor battery life. There is also Motorola’s new offering called the Moto X-style personal customization.

With the 2015 Moto 360, users are able to select from a wide array of customization options. The design, hardware, and even the display are all improved. Plus (and a great plus indeed) is that it has now an improved solid battery life.

Design-wise, the 2015 model of the smartwatch looks very similar, even nearly identical to its predecessor. It is still dominated by that familiar circular display, and there is a tiny slice removed from the bottom of the round display to where the sensors are located. This is a move made to keep the bezel on the watch nice and slim.

The side button is still there but the location has been moved slightly upward. Another improvement is that the watchband lugs are now on the outside of the case. This is something that makes the watch more like a traditional timepiece and less like a wearable tech that it is. Furthermore, this move is not just to turn up its design qualities as it also makes the strap quite easy to change by yourself.

Now, interested people who want to get their hands on this smartwatch can select one of two models. One is a smaller 42-millimeter option and the other is a little bit larger at 36-millimeters. These are all common sizes, which means that owners will be able to find third-party straps for their Motorola smartwatch quite easily.

While just about everything on the Moto 360 (2015) model looks and feels really good, there are some caveats. Android Wear still need some tweaks here and there, and this time around it is a more expensive model than the predecessor.