The Lenovo Yoga Tab 3 Pro is your barebones all-in-one entertainment center. Some of its rivals are centered around portability, such as the iPad Air 2 and Nexus 9, this particular tablet from Lenovo instead focuses on having a bevy of hardware tricks up its sleeve. It has unique features which even include a cylindrical stand and a built-in projector. With its line of hardware specs and features, it is easy to call it one of the most innovative and most interesting slates that you will get to use in some time. However, its heavy weight along with its out-of-date software can put off some people. 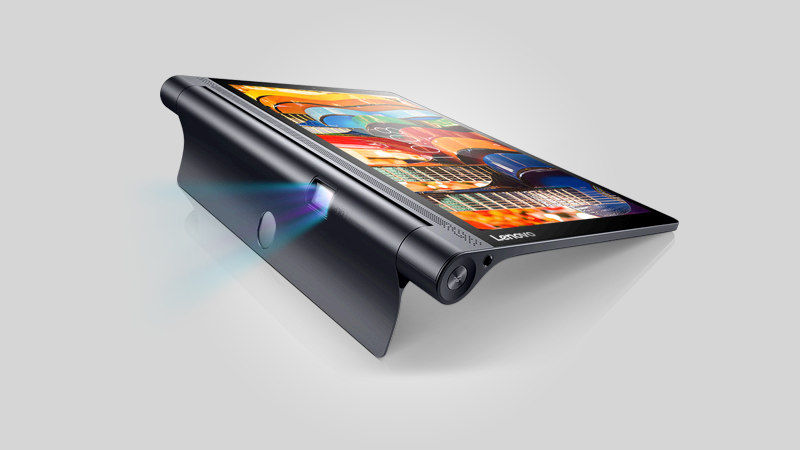 When it comes to design, the Lenovo Yoga Tab 3 Pro comes in a similar look with that of the Yoga Tab 2 Pro, which the latter device was released back in 2014. As mentioned earlier, it comes with a cylindrical base along one of its longer edges. This base also house the tablet’s flip-out metal stand, speakers, and its very own DLP projector. Liking the look of this particular slate is relative as there are those who come to adore it whereas there are some who would rather stay away from the tablet just by its looks.

Nevertheless, you cannot get off the fact that the design is primarily made for functionality instead of fashion or portability. Its intelligently designed stand lets users pop it out with just a press of a button found on the device’s rear. With the stand, it will let you set the Yoga Tab 3 Pro at a good variety of angles. In fact, you can even hang it on a hook if you so desire.

The option of adding a free stand into the standard packaging will let a lot of people agree that it is a Godsend for a number of scenarios. For instance, if you’re cooking in your kitchen and you would want to prop up the tablet as it displays the recipe, you can remove the need to get something to assist in awkwardly making the slate stand. Furthermore, you no longer have to touch the device with grease-riddled fingers.

But perhaps what makes people to just move on from purchasing the Lenovo Yoga Tab 3 Pro is because of its software. It runs on Android 5.1 Lollipop with Lenovo’s own custom skin that does not look quite pleasing. The company did a number of bizarre changes to make for their custom skin, such as removing the app drawer. Overall, getting this particular tablet comes at a split decision as you might get it for its overall functionality but wouldn’t mind the out-of-date software, or would you just move on towards other slates on the market. You decide.