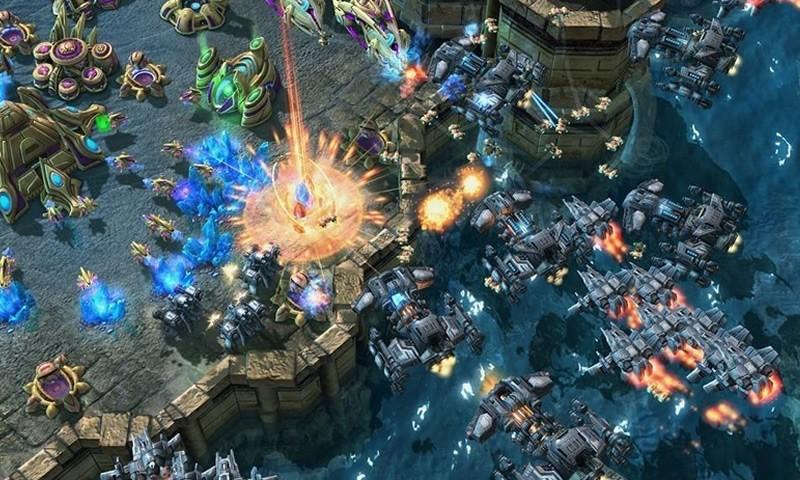 The StarCraft show has enjoyed tremendous global success since its launch into the ‘90s. The original RTS stayed a competitive standby for decades, and StarCraft II continued that legacy while expanding the intricate  intergalactic story about unlikely racial alliances  and a universal threat. The StarCraft saga  concludes with the third and final entry, Legacy  for the Void, but devotees of this beloved multiplayer mode have actually a great deal to look forward to even  following the credits roll.

I got my hands on this Archon mode during a demo at GDC 2015, where I became paired up with another journalist whose StarCraft play had lapsed a bit. Considering he had more experience, I devoted myself to managing resource gathering, building out our Terran base, and creating units to grow our army. My ally (and the helpful Blizzard reps) offered me suggestions about exactly how many SCV units to assign to collecting vespene gas and minerals needed to build useful stuff. Meanwhile, my partner started scouting the map for extra resources for future base expansion and finding the enemy.

I love plenty things Blizzard has done, from SNES deep cuts like Blackthorne to World of Warcraft, nevertheless the celebrated StarCraft series has eluded me personally every one of these years. Fortunately, Blizzard is implementing a mode Ravager units rain down a fiery barrage from the sky that’s perfect for slouches like me that are surrounded by skilled StarCraft players wanting to bring more buddies into the fold. The mode allows two-on-two multiplayer matches, where  teammates share joint control of a single army.

Early on, my trial by fire was overwhelming. The deluge of jargon, micromanagement methods, and tiered build order was a great deal to take in. Things got even more heated when our marines and siege tanks started meeting up with all the Protoss enemies mid-battlefield. Unit production and upgrading shifted to top priority, and my co-op partner ultimately took on the duties of micromanaging combat while establishing destination parts for freshly created soldiers. Instead, we each could’ve shared the duty for managing the combat and overwhelmed the Protoss base with a coordinated pincer attack. Regardless, we gradually  defeated their forces and won the day.

We succeeded within our Archon mode match thanks to some powerhouse units, like the newly added Terran Cyclone. This treaded  missile tank is great for kiting enemy units far from the fray and exposing them to an  explosive barrage. Blizzard also unveiled a new  Protoss product called the Adept. This second-tier  ranged unit wields a glowing energy disk, which  chains between targets for multiple kills. She  also has psionic projection, which creates an  ethereal doppelganger of herself which can be  relocated anywhere and automatically teleports  her there after 10 seconds. The Adept joins  another verified unit, the Disruptor, as well as the  Zergs’ Lurker and Ravager.

Getting a handful of new units is awesome, but Blizzard also revealed the unfortunate news that a previously established Terran unit, the Herc, has been canceled. These bipedal tanks were initially built to withstand zergling/baneling attacks while their teammates provide countertop resistance.  Blizzard senior designer David Kim offers explanation on the scrapped unit. “The Terran Herc didn’t work out because of its overlap with the Hellbat,” Kim says, discussing a similar Terran mech unit. “We tried our better to keep the two units distinct because of their mobility advantage and differing armor types, but both had been short range, splash-damage units that can come online around the same tech level that counters virtually identical things. The Lerilak Crest is situated on a Dark Templar planet amidst the ruins of an ancient race. Orbital Shipyard is a Terran starship repair platform that floats above the planet Korhal. Ruins of Seras is placed on a Legacy of this Void will also introduce Allied  Commanders mode, which allows players controlling various events to team up against A.I. enemies mountainous region on the Protoss homeworld, Aiur, and features ruins being overrun by the encompassing jungle.
We try our best to not have device overlaps within the game, and these two units just shared too many similarities. We’re constantly exploring extra unit types with the balance for the game at heart, so this does not preclude yet another unit in the foreseeable future for Terran players.” While we lost a new Terran unit, there are a few brand new maps in route to shake up  multiplayer.

Blizzard, the company behind StarCraft still did announce the official release date of StarCraft II: Legacy Of The Void as well as beta download of the game.