Introducing the Samsung Family Hub and it is a refrigerator brought to us by the South Korean tech giant that is sure to make wallets cry and break banks. Whether we want them to or not, it is clear that appliances makers of modern times are now trying their best to introduce their products into the connected era. With this smart refrigerator, users are able to make use of the Internet for “smarter” functionalities. It also has a touchscreen interface and it also comes with a camera. Samsung intends to make this refrigerator as an answer as the 21st century’s Post-It note-covered family fridge. 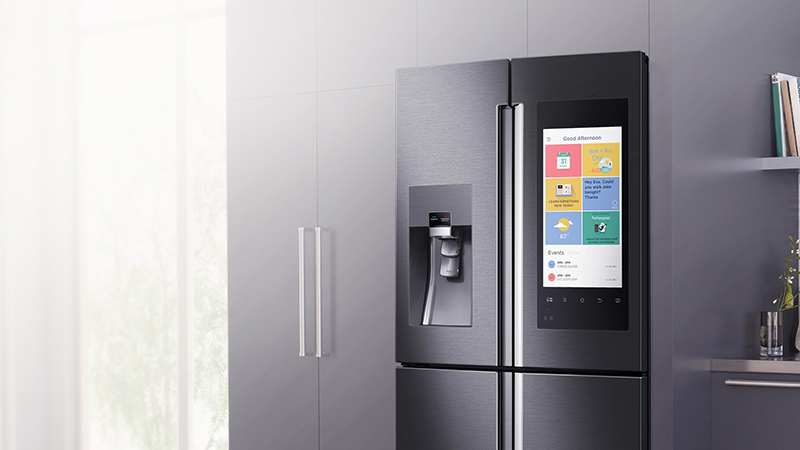 The Samsung Family Hub is the current centerpiece for the tech firm’s refrigerator line. It contains a massive 21.5-inch touch capacitive screen and it gives of an appearance that the South Korean company has slapped on a massive smartphone onto the unit’s door. Once activated, the screen then becomes a shared space for posting you or your family’s digital sticky notes. You can also view photos, or even watch television with it, that is IF you don’t mind watching TV shows on your refrigerator.

The Family Hub is not the first Samsung refrigerator to ever sport a touchscreen interface. The South Korean technology firm did produce some refrigerators in the past that do have touch capacitive interfaces. However, this time around, the new model offers a larger screen which means you can fit more apps into it. Before moving forward, yes, even your refrigerator can have apps now. A couple of examples that you can download and install into this particular fridge are Instacart and Groceries by MasterCard. Both of these apps will allow you to order groceries just when you’re about to run low.

But aside from its massive touchscreen interface, its standout feature would that be of its camera system. When combined with a companion smartphone app, the fridge’s three cameras will allow you to look into the unit without having to open it. This would allow you to take a look inside even when you’re not at home. For instance, if you’re already at the grocery and have forgotten to put a certain item into your grocery list but don’t know what it is, just open up the app and take a peek inside.

The cameras on the Samsung Family Hub also work as the device’s “Food Reminders” app. With this particular app, it lets you drag and drop expiration date reminders found on various foods inside the fridge. With great potential comes a great asking price, so this particular refrigerator won’t be easily available for all individuals.