When you are looking for “meaty” tablets, then perhaps the Lenovo Yoga Tab 3 should be your cup of tea. Even though it does look chunkier than other tablets in the Android line, it does has its appeal but it’s not glamorous. If there’s one word to describe it’s looks, that would be “normal.” Still, it has a tapered silhouette that will turn some heads, but not a lot. It has an 8-inch display and with that screen-size, you know you’re not going to get top-of-the-line specs for this mobile device. 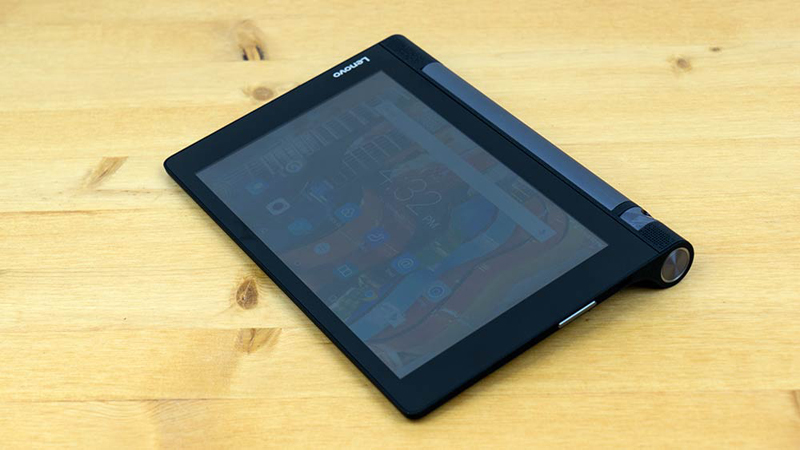 The Lenovo Yoga Tab 3 is “Normal”

Looking further on the exteriors of the Lenovo Yoga Tab 3, it has a soft touch black plastic at its back. The back is grippy so users don’t have to worry about the tablet slipping off of their sweaty hands. The device also has fairly large bezels.

The CPU for the Yoga Tab 3 is a low-end Qualcomm Snapdragon CPU. It uses a Snapdragon 212 chip which may come as a surprise for many considering that they only hear about the Snapdragon 800, 600, or even the 400 series. However, even though this tablet has such a low-end CPU, the mobile device does perform well enough for a usable experience. Just don’t expect to be able to get decent performance for memory-eating apps.

Out of the box, this device comes with the Android 5.1.1 operating system. The UI is fairly clean without the heavy customization that other tablets may have, such as other tablet offerings from Lenovo. It has a single band Wi-Fi 802.11n connectivity, Bluetooth 4.1 technology, GPS with GLOMASS, and an 8-megpaixel rear snapper that swivels so it can act as a front camera as well.

Another defining feature of the Lenovo Yoga tablets is their capacious battery in the barrel hinge. This promotes a better battery-life as compared to other low-end Android tablets in the market.

The Tab 3 has Lenovo’s AnyPen digitizer. This is a feature wherein you can use literally any pen, or even any pointed object, to act as a stylus. The glass on the display is quite durable and is able to resist marks from pens and pencils. Still, it may not be pleasing for everyone to get a pointed object and tap it around on the glass screen.

The Lenovo Yoga Tab 3 performs moderately, has pretty decent specs, and even an okay build quality. Everything about it is as normal as tablets can go. It does a fairly good job at beating some of its more low-end competitors, but it won’t be winning any races even the mobile tablet competition any time soon.