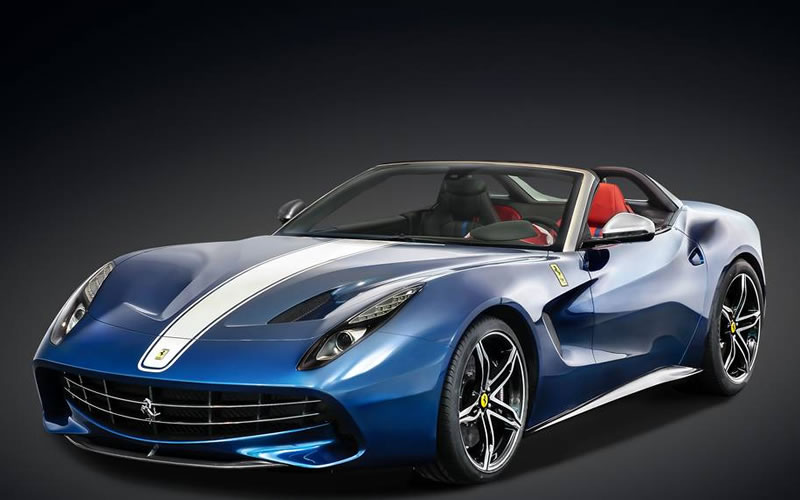 At Maranello, we’ve always looked with great afection to the US. There’s a long history of unique cars, and they’ve become highly sought-after collector’s items.” Freshly deposed Ferrari chairman Luca di Montezemolo was due to make his farewell appearance after 23 years at the helm during Ferrari’s recent 60th anniversary US celebrations in Los Angeles. Instead, he was a rather poignant no-show. But one of his last public pronouncements trailed the debut of the company’s latest ultra low-volume special, the commemorative Ferrari F60 America. Just 10 will be made and, such is the rapacity of Ferrari’s US fanbase, they were all instantly spoken for, despite costing £2.4m each. Perhaps the new regime would have called for 20.

Its rarity means that Ferrari could have charged whatever they liked, but the Ferrari F60 America does at least substantially rework the F12 Berlinetta on which it’s based. Most obviously, the roof has gone, and rather than aping 2005’s Superamerica, which had a folding Revochromic roof, the new car takes its cue from the 2010 599 SA Aperta and the early Noughties 550 Barchetta. A skinny fabric cover ofers modest protection up to around 75mph, but its fimsiness is likely to be academic to the car’s owners. These guys don’t ‘do’ rain.

Since 2008, Ferrari has built more than 20 special project cars, most recently the F12-based TRS that appeared at Goodwood. Although primarily a response to the trend among the world’s rich for bespoke products, it’s a process that has allowed the company’s designers and Ferrari’s Pininfarina partner to stretch out like they used to in the Fifties heyday of Italian carrozzerias. So pretty much every panel on the Ferrari F60 America is new, and there’s a subtle but deliberate undercurrent of American muscle car about this reboot. The front end has been completely revised and lengthened, with a new grille and difuser. The ‘standard’ car’s aero-elastic faps have been replaced with reprofled intakes, and there are new inlets on the bonnet. The F12’s distinctive front aero bridge has also disappeared, and the upward thrust of that car’s body sides has  been fashioned into something that draws the eye downward, before resolving into a typically Italian posterior. Two leathertrimmed roll-hoops fow into carbon-fbrefnished buttresses, and the rear end features numerous detail revisions.

Ferrari likes to treat its limited-series cars and one-ofs as experimental projects, but while they all keep the base car’s hard points (and have to respect the rules on homologation), one wonders how the Ferrari F60 America’s aero numbers difer from the existing car’s. With Ferrari’s epic 6.3-litre, 730bhp V12 under the bonnet and no roof, the F12’s pace – 0–62 in 3.1, 0–100 in 6.5, 211mph vmax – can surely only be intensifed. Inside, and not for the frst time, the taste police are on standby. Ferrari says the car’s asymmetric cabin design is a nod to its historic competition cars, with the driver’s side swathed in red leather and composites, the passenger compartment in black. The dashboard, central tunnel and door panels also feature a composite fnish. The seats are unique and include a stylised stars ’n’ stripes motif on the central seam. Perhaps the car should play Jimi Hendrix’s take on ‘Star Spangled Banner’ on start-up. Its heart is in the right place, though. The blue exterior paint fnish and white stripe is a tribute to Luigi Chinetti’s North American Racing Team. Chinetti, who scored Ferrari’s frst victory at Le Mans in 1949 practically single-handed, later turned Enzo Ferrari on to the possibilities of the US as a lucrative export market. It’s also one of his creations – the 275 GTB/4 NART Spyder, of which only 10 were made and a car that now commands $26m – to which this latest Ferrari is most indebted.